Edgar has long been weary of the gossips and hypocrisy. The only thing in this world that is worthy of his pursuit is the true essence of art and creative inspiration.

Edgar Valden is a young man with a petite build and peach-toned skin. His light brown hair is styled with short bangs across his forehead and longer ones in front of his ears. In the back, he has a short ponytail, in a style typical to European aristocracy. He has a pair of light blue eyes with a single stitch on each side, representing eyelashes.

He wears a tattered and paint-stained red cloak with a bow and a matching beret. His shirt is white, with paint stains on the cuffs, and a tear on his right shoulder and left elbow. He wears cuffed grey trousers held up by light brown suspenders, and a pair of mismatched brown boots. Both boots lace up the front and are tied with a bow, but the right boot reaches his knee while his left one only reaches mid-calf. Under the shorter boot, he wears a tall white sock.

The only son in the Valden family of aristocrats, Edgar showed an interest and high talent in painting from childhood. Praise from his family and the public has led to his eccentric character. He only sees art from his own perspective and has a high self-esteem. His perception of the world around him led to his belief that nobody else is worthy to speak to him about art.

All that is beautiful in this world; once upon a time, that was the inspiration for my paintings. But slowly, they stopped looking so lovable to me. The plebeians, you see, they do not revere art; because they will never grasp it. Hypocritical and double-faced, avaricious and insatiable, obstreperous and useless. None amongst you can speak with me on the true essence of art.

And, when this place can bring me pleasure no more, I can only hope that that paradise; Oletus Manor, will bring me yet unknown inspiration.

When the painting is done, he can place the drawing board in the scene. When the Hunter sees the placed drawing board, they will be attracted by it, walk over involuntarily and stop to admire their face in front of it.

Memories: Within a certain range of a Hunter, the Painter needs to look at the Hunter's face from the front to memorize it.

Aesthetic Resonance = During the creation of a painting, the Painter will be affected by his own work. Every time he places a painting, his movement speed will increase permanently by 2%. This effect can be stacked up to 3 times.

Intuition = The Painter is perceptive and observant to real-life objects and so he will not be affected by a Rocket Chair with 50% progress. When he is put on a Rocket Chair for the second time, the progress will return to what it was the last time he was saved.

Self Fulfillment = When the painting's effect wears off, the Hunter will be extremely interested in its painter. The Painter will expose his location to the Hunter for 5 seconds.

Memory: When the Hunter is within a certain range, the Painter can remember their appearance by looking at them from the front.

Aesthetic Resonance = Painters are inspired by their paintings. Each time you set up an easel with a picture, the movement speed increases by 2%. The effect can be stacked 3 times (+ 6% in total).

Emotional Intuition = The Painter focuses on the sensations behind real objects. Therefore, he is not afraid of progress when sitting on a rocket chair. When a Painter is put on a rocket chair for the second time, the progress in sitting on the chair continues from the moment he was last placed.

My Place = When the effect of attraction to the picture disappears from the Hunter, the Hunter shows great interest in its author, and the Painter reveals his location to the Hunter within 5 seconds.

Deduction Targets are currently unavailable for this character.

Non-exclusive accessories that can be worn by any survivor can be found here.

Pets for survivors are non-exclusive and can be worn by any character. A full list of Pets can be found here.

“Actually, this post has hints, but it may not be obvious. Edgar had been stuck in an art block for a long time and shut himself in his room. At this time, the manor's letter suggested that he used human blood as paint. After trying, Edgar became addicted to it and couldn't help himself, but he eventually could no longer be satisfied with his own blood. So he agreed to the manor’s invitation to participate in the game, and wanted to use this as an opportunity to complete his ‘most perfect work.’ ” [1]

Promotional art on Official Twitter - "His talent is like a beam of light, shining into many people's hearts. He is Edgar, a Painter of magic." 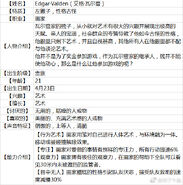 Contest design comic page 2
Add a photo to this gallery

Retrieved from "https://id5.fandom.com/wiki/Edgar_Valden?oldid=17039"
Community content is available under CC-BY-SA unless otherwise noted.