一oO妖怪Oo一
Aesop Carl, also known as the Embalmer, is a survivor available for purchase after completion of the prologue. He is one of the 33 playable Survivors added to Identity V.

Aesop has a slim build with a peach skin tone. He has dark grey hair that is combed to the left and tied into a queue. He also has grey eyes. He dons a pair of black grey pants and a matching grey closed jacket. He also wears black shoes, white medical gloves, and a medical mask that covers his mouth. He carries a black and silver makeup box.

There are minor differences in the final destination of people's lives and Aesop Carl is most definitely the person people envision sending them on their final journey. He follows every procedural step rigorously and affords the highest respect to visitors that have come to their final destination. He decided to take the place of an unfortunate, mysterious mother and complete her final wish after finding that letter on her.[1]

The Embalmer is able to summon a Coffin, which will give a free revive/rescue from either being downed or put in a Rocket Chair. It will go to Aesop by default, but he is able to change who will use the coffin by putting their face on it, as long as he has seen the teammate's face beforehand in that match. Once the coffin is used, the survivor in question will appear in the coffin with the costum they are wearing (such as fool’s heart).

There are minor differences in the final destination of people's lives and Aesop Carl is most definitely the person people envision sending them on their final journey. He follows every procedural step rigorously and affords the highest respect to visitors that have come to their final destination. He decided to take the place of an unfortunate, mysterious mother and complete her final wish after finding that letter on her.[2]

Gathered from his Deductions: After Aesop’s mother passed, Aesop was taken care of by Jerry Carl (the man who planned his mother’s funeral), and took on the surname "Carl" from him. Aesop was denied access to an education due to having Autism, 'or some other problems' which the school used as a reason to expel him. As such, Jerry Carl began to teach Aesop embalming as an apprentice.

As it turned out, Jerry "mercy killed" those he believed to not be living a good enough life. Jerry would try convincing them to die by his hands, but if they refused he would inject them with bromide hydrate (a highly toxic body preserver). Over time he also taught these tactics to Aesop, and convinced him that this was the right thing to do. Though Aesop assisted his teacher in the serial killing, when he found out Jerry had also killed his mother he was upset. Jerry comforted Aesop by saying she was meant to die.

At some point, Jerry Carl received an invitation to the manor. He returned from it alive, although with severe injuries (implying he escaped or won the game at the cost of his physical health). Seeing Jerry become the kind of person who was "meant to die," Aesop used Jerry's own manipulation tactics, as well as eventually the poisonous bromide on his teacher. And so, he became what his teacher once was, and found joy in it.

Later, an unknown girl was embalmed by Aesop and he also found an invitation letter, which he believed was for him. Aesop’s motive to come to the manor was to ‘embalm’ the hurt survivors in order to have them see how beautiful death is.

Skin analysis provided by user YuoRavik07, a further look at Aesop's character through his skins: https://docs.google.com/document/d/16lyxearuEfgqkB6e48_p01-x3-a0aTO1TxzkkRHCrJE/edit

This is a design that most people should have heard about already, since it is the most popular, and is our favorite as well. The design passed almost immediately. What attracted us to him is his unique identity — his connection with the dead. The first impression of his nature and secrets are inseparable from tragedy (of others).

On the one hand, his core ability "Embalm" provides the same tactical change of remote rescue as another new survivor. On the other hand, the built-in damage risk effect also makes the ability balanced. Incorrect usage may give the Hunter an opportunity to make a comeback. However, we still feel that the effect of this skill will be relatively strong, so in subsequent revisions, we may focus on how to provide Hunters with effective countermeasures to balance the benefits in the game.

It is worth mentioning that: The all-in-one weakened version (not immune to damage, can be healed, but will automatically fall to the ground after a period of time) is also an idea that we have considered to increase the performance benefits for Hunters. However, because we later had other designs, this idea was let go, and this role can just verify the feasibility of this idea.

Press "Expand" to see notes from the release announcement.

Between life and death, everything is solemn. NetEase's first asymmetric competitive mobile game "Identity V" will bring all players a new Survivor, "Embalmer" Aesop Carl. This character who stood out in the designer competition was designed by the player "@一oO妖怪Oo一(Weibo ID)". Not only does he have an amazing appearance, but he can also help his teammates return to life by virtue of his powerful "embalming" skills.

Man of send-offs[5]: Step into the manor to fulfill the final wish.

The 21-year-old "Embalmer", Aesop Carl, prefers to be alone, and hates contact with living people, preferring to be close to the deceased. This is the fundamental reason why he engages in his profession. For those who have passed away, the end of the journey of life is always the same, and Aesop Carl has become the last person in many people's dreams. He strictly abides by every step of the procedure and pays the utmost respect to these passengers arriving at their final stop. So when Carl found the letter on the beautiful traveler with a mystery, he decided to step into the mysterious manor and fulfill the last wish for this unfortunate mother.

In terms of skill introduction, the role of the Embalmer in "Identity V" is clear: He is an indispensable assistant to the whole team. With the "make-up mastery" skill, the Embalmer can perform remote rescues, which can reduce the risk of rescuing to a certain extent. However, it should be noted that when the Embalmer is deciphering with others, his deciphering speed is reduced by 15%, and he lacks the ability to protect himself. Hunters need to rely on Broken Window Theory and basic skills. In general, the Embalmer is a survivor who needs a lot of awareness, and is suitable for players with a certain basic foundation.

Note: This is translated from the backstory written by Aesop's creator, and may contradict with his deductions.

He told me that some of the deceased in this world could not identify their own departures, and we were the guides for those people. In the beginning, I believed that these talking deceased were alive, but gradually, as father spoke to those “deceased”, they also agreed with him; that they were already dead. Therefore, I firmly believe that only death is honest. To demonstrate to them and help them recognize the truth, to aid them in accepting death; that is what we must do.

The day I became of age, my adoptive father received an invitation. I didn’t know who had sent it, or its contents. To my surprise, he abandoned both the funeral parlor and I and left. He said that he felt a strong scent of death coming from there, perhaps something to challenge his skills. So he left, leaving the funeral parlor to me.

Ten degrees Celsius, hydrogen bromide, all prepared for those “corpses” who refuse to accept death. My adoptive father said that this will help relax their muscles and maintain a perfect state to embrace death. I skillfully practice this on a regular basis, and help my “deceased” deeply understand that death is the only truth.

That day, I received a different “corpse”; one I could actually recognize - my adoptive father. The certificate of death the hospital provided noted that he died due to falling from a high place, and wounds opened by sharp objects covered his body. How strange.

My adoptive father didn’t want to admit he was already dead. How could the adoptive father who once explained these principles to me make a mistake only “deceased” would? I felt sorrow for my adoptive father, for did I truly have to teach him the easy concept he once taught me?

Like the way he would correct the mistakes of other “deceased”, I injected medicine to help him relax into his veins and turned down the temperature. Soon, he fell into a deep sleep. A relaxed state such as this was perfect for me to embalm him!

A month after, it was his funeral; a funeral with no other attendees. My adoptive father never had any close acquaintances, and therefore there was nobody else there to perform his send-off. I think my presence alone was enough for his funeral. I wanted to help my adoptive father accept his own death faster, a departure with dignity.

Despite the fact that my adoptive father took longer than I anticipated to agree to embracing death, luckily, he relented before the date of his funeral. Even though there was nobody else present, still I prepared a luxurious funeral for him as my final act of respect for my adoptive father, in hope of him being able to enjoy such gifts in heaven.

As usual, I stayed in the funeral parlor every day, embalming “the deceased”, avoiding too much communication with others, living my ordinary life.

Small sprite of the Embalmer 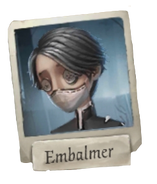 Art posted on the official Identity V Twitter featuring Aesop getting hit in the head by Norton during a race.

"2020 is here! Wishing all of you a happy year filled with golden light~ And do please continue to enjoy Identity V 「Come and play with us this New Year's Eve!」"[13]

Back to school promotional poster

Aesop having a picnic with Eli and Melly

"The first day of the new year! Happy New Year, everyone! What are our dear detectives wishing for this year?" - Lunar New Year 2021 artwork featuring Sculptor carving sculptures of a scene with a little Seer and Thief 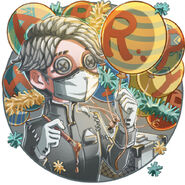 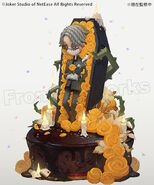