Liu Yijia ( 劉以嘉 )
Jose Baden, also known as the First Officer, is a Rescue character in Identity V. He is a Difficulty Level 2 character and is one of 33 playable Survivors added to Identity V.

First Officer has a well-built body with a peach skin tone. He has a short black hair along with a beard on his upper lips and chin, he also has a scar on his right eye. He wears a silver earring on his left ear and he has a prosthetic arm.

He wears a British soldier uniform and a red coat that covers his white buttoned shirt that reveals slightly his chest. He wears a necklace beneath his shirt. He also sports a white sash that covers his coat. White pants and black leather boots clothe his legs. His eyes are different which possibly suggests that he has Heterochromia Iridium or his left eye is made of glass; his right eye is a teal-colored button and his left eye is gold-rimmed and colored black with a "B" carved on, perhaps standing for his last name, 'Baden'.

He has a pocket watch that allows him to hypnotize Hunters, causing them to black out and then see illusionary First Officers, as well as the ability to 'vanish' when a survivor other than himself is placed on a rocket chair.

Press "Expand" to see the description of each trait.

In order to find the whereabouts of his loved ones and restore his family's reputation, the sea knight, Jose Baden, decided to enter the cursed Oletus Manor. This time, will his magical pocket watch assure smooth sailing?

The sunset ran very late that day. I waited from its start till its end, but still the ship my father was transporting antiques on did not return. The Queen was furious. Suspecting my father had stolen her treasure, she ordered that the Baden family be stripped of our wealth and title. The maritime Baden family of old had, from that day forth, fallen. Until I heard a rumor; That an antique Chinese umbrella from the vanished ship had turned up at a place called Oletus Manor. I must set foot myself on this cursed land, find my father, and take back the honor that belongs to me. [1][2]

Once upon a time, there wasn’t a single man that didn’t know Jose Baden, the First Officer. His father, the captain, and him were protectors and escorts for the British crown’s maritime empire. They were wealthy, heroic, gallant, and very punctual. Whether shielding English ships, or transporting royal treasures, the Baden family were never late. Rumor has it that this was because Baden had obtained a pocket watch blessed by the God of the Sea. The tide and great waves alike would heed his call, never delaying his ships. Thus, they enjoyed the Queen’s favor in no small measure, receiving titles despite being foreigners.

But one day, Baden, who had been delayed by matters in Liverpool, did not set out to sea with his father. At sunset he awaited his father at the port, but the ship that so loyally served the crown did not return on time. In fact, the ship, as well as all its crew, never reappeared upon the sea. The Queen was enraged. Believing that the Badens had stolen her treasure, she stripped Jose Baden of his family’s riches and title. Jose Baden had fallen.

Not long after, Jose received some information. On the list of goods upon that missing ship was a certain antique Chinese umbrella, and now it had appeared in a place called Oletus Manor.

Once a knight of the sea, he decided to set foot on this cursed land himself; to find his father, or at the very least…… to take back what is rightfully his. [3]

Being a First Officer, Jose Baden’s relationship with his father, the captain, was always one of tacit understanding. With the captain’s rich seafaring experience and the mysterious power of the First Officer’s pocket watch, their merchant ship was undefeatable. Even the Queen trusted them to work for her.

One day, due to some business, Baden was unable to set sail. When the agreed return date arrived, the merchant ship was gone without a trace, and all its crew and treasures vanished into thin air, never to be seen again. The Queen, trembling with rage, stripped the Badens of their wealth and titles. In just one night, the First Officer lauded as a knight upon the sea had fallen; he was now nothing more than a widely detested, down-and-out thief.

After that, Baden heard tell of a priceless antique Chinese umbrella, one of the treasures on the ship, turning up at Oletus Manor. People said that Manor was filled with evil and terror, but how could the magnificent First Officer Jose Baden be scared of a simple legend? He gave the pocket watch at his breast a squeeze, and felt in that moment filled with power. Perhaps the chance to find his family’s wealth and honor lay right in the Manor! [4]

The First Officer as he appears in the post-match screen after a match has been completed. 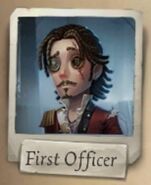 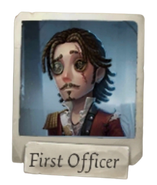 "Today is Dahan and the Laba Festival. The coldest days are almost over. Let's eat a bowl of Laba Congee and look forward to spring together!" 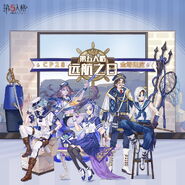 https://twitter "Will you listen to my story for a moment? Watch the flame of this candle for the tale will last as long as it burns... Many stories are born but the people behind them often overlooked... Tonight we enter the manor, let's spin a wonderful tale together" 3rd Anniversary Art.