Liu Beichen
Orpheus is a detective and starting character of the Identity V story. The story is revealed through Orpheus' ability to deduce the personality and experiences of the characters through their diaries. He is described as having an almost supernatural ability to 'see' what has occurred in the past through deductions and written evidence.

He is introduced in the Tutorial as he drives to the mysterious Oletus Manor on the heels of a missing child case. The player's username is described as an old "alias" of his.

During the Tutorial, a few notable details are revealed about Orpheus, which are important to the story;

Orpheus was once a famous crime novelist, but after being rescued from a fire about 10 years ago, he lost all his memories. His body recovered, but his memories never returned. Unable to do anything about his memory, Orpheus accepted his new lifestyle and founded his own detective agency.

However, he received no good cases and turned back to drinking. Orpheus would awaken the next day to find cuts all over his body, with objects that he never would've touched normally.

Even after Orpheus stopped drinking, days would mysteriously get skipped over with increasing frequency. He eventually found the source of his problem from the looks from his neighbors: he didn't lose track of the days at all, but instead, another persona awakened inside him, his old self. 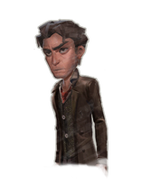 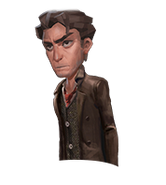 Wishing everyone to sail through a thousand journeys and return still as a youth.[1]

Wishing everyone to sail through a thousand journeys and return still as a youth.[2]

Orpheus' deductions regarding survivors of the game.