View source
watch 02:17
New Pokemon Games - The Loop
Do you like this video?
Play Sound

Being in a daze

By Hook or By Crook | Emotional Attachment | Bonded

Emil, also known as the Patient, is a Contain-Type and Difficult 2 Survivor available for purchase after completion of the prologue. He is one of 35 playable Survivors added to Identity V.

He has dark, messy, medium length black hair that obscures his eyes, and his skin has visible bruises and small cuts. He wears an untied straight-jacket, with a large metal collar that braces under his arms, and has visible screws along the shoulders.

Emil is a contain-type survivor who has a Grappling Hook with 3 uses. The grappling hook allows him to latch onto any obstacle, and either wall-jump off in a different direction or climb up, depending on the height of the object and where it was grappled. He rescues the "Psychologist" faster and can dash to her, but will decode slower if on the same Cipher Machine as a female other than Ada.

By Hook or By Crook

Press "Expand" to see the description of each trait.

The following was translated from the Weibo post[1] into English by the community:

At the age of 25, Ada Mesmer, a psychologist by profession, became obsessed with hypnotherapy — the ability to hypnotize patients with the help of autosuggestion and special influences to rid them of pain, fear and other negative emotions. However, the subjects could not stand it and did not react to her hypnosis in any way. Having failed time after time, she gave up hypnotherapy and decided to devote herself to other studies.

A few years later, while working temporarily in the White Sand Street Asylum, Ada met Emil, a patient suffering from amnesia. He was silent, mysterious, but most importantly, he reacted perfectly to her hypnosis. Gradually, Ada became attached to Emil, becoming more and more convinced that he was the perfect experiment for her. When the term of the employment contract with the psychiatric hospital came to an end, Ada realized that she had feelings for Emil, and she decided to help him escape.

Suffering from constant fever and headaches, Emil lost most of his memory. After Ada helped Emil escape from the hospital, he managed to recover a little — some normal emotional reactions for a person returned to normal, and with them vague memories returned: "I remember how I was forcibly held, tied up, locked in a cage. The sky was like dust, there were ferocious dogs everywhere and countless people uttering crazy cheers in greeting..."

Ada's research continues, and now a perverted, but sincere love connects her with Emil. Ada took Emil with her and used him to continue experiments with hypnosis. She firmly believes that Emil, suffering from amnesia, needs treatment, and only she can save him. Although sometimes life with Ada causes Emil pain, it also makes him feel happy. Perfect obedience, dependence and the desire to protect Ada are for him a true 'proof of love' for her.

No one knows Emil's past. When they looked at him, most people just saw a poor tramp living in the street. A high fever robbed him of most of his memories, and when he regained consciousness, he found himself in an insane asylum. Emil endured much suffering there, but he remained obedient. Through injections, restraints, and electric shock therapy... he was always the most silent among all the asylum's patients.

In the asylum, the amnesiac Emil appeared more taciturn and calm than others. He then met Ada, who entered the asylum to practice medicine. She soon decided to take him away, gradually helping him recover some of his normal emotional reactions and actions. But he would still often recall his days in the asylum—those vague memories of being imprisoned, bound, and unable to move. Dust flew through the stifling air, and countless faces cheered wildly all around him. Since then, whenever he was strapped to a chair or hospital bed, he became anxious and instinctively panicked.

Emil could not remember his identity, but he knew that Ada was different from others, different for him. Ada treated him as a personal possession, to be taken with her as she pleased. Though somewhat twisted, their feelings are sincere. Ada doesn't care about Emil's forgotten past, and Emil also accepts Ada's 'treatment.' After all, for Emil, Ada's treatment feels more like love and care than the pain he received in those fragmented memories.[2]

No one knows Emil's past...

The below article or section(s) contains speculation, analysis, or theories which may include unconfirmed information.

When adding content, use references to link or explain legitimate/official supportive evidence for specific theories, otherwise it may be removed.

Emil was born the 'runt' of four children to a dysfunctional family. His mother struggled with her mental health, resulting in her breaking the dishes and having to be tied to a bed in the middle of her episodes. The family was too poor to take care of their children, so they gave Emil up to a man who owned dozens of hounds for the purpose of participating in a decently popular dog-fighting pit. He often berated Emil for not bringing home enough money from begging to keep them afloat, simultaneously neglecting his needs. He did not supervise Emil during play, which led to the curious boy hopping into the pit while a fight was underway. The dogs attacked, striking Emil within an inch of his life and traumatizing him in the process. Seeing as the audience enjoyed the bloodshed, Emil's new guardian took sadistic pleasure in re-traumatizing him, chaining him inside of a kennel with nothing but mush in a dog's bowl to eat and strapping him to a cage in the middle of the pit.

Emil's tattered memory went from unreliable to non-existent. He was admitted to the White Sand Street Asylum, his records stating that he suffered from amnesia, manic fits and severe aggressive tendencies. The dog-fighting pit's emblem sewn onto a strip of fabric was the only clue Emil had as to who he was supposed to be.[4]

Having been exposed to more dogs than people in his lifetime, Emil subconsciously developed multiple dog-like traits. He bit a guard's arm and drew blood upon feeling threatened, which landed him in one of the 'cages'— solitary confinement chambers reserved for patients with dangerous conditions. There, he was subjected to frequent and torturous sessions of electroshock therapy. Emil was also force-fed a dangerous amount of sedatives in either pill or liquid form, causing serious damage to his nervous system. His nerves were so overwhelmed by the sedatives that he couldn't sense his own pain, even as the electricity destroyed him from the inside. He did not resist treatment. Emil would smile cheerfully at the doctors while he underwent the gut-wrenching procedure, blissfully unaware of what was happening to him.[5]

Ada Mesmer arrived at the asylum for temporary employment, taking interest in Emil's file after witnessing his reaction to electroshock therapy and later requesting to administer his treatments herself. Ada instantly gained the lonely Emil's trust, as her empathetic presence became memorable to him; Emil had never been shown such compassion before, and he was unsure how to interpret it. Knowing that the sedatives were hurting him, Ada decided to lower his dosage, which would allow him to be conscious, but would also significantly increase the level of pain he would have to endure. The following day, he cried out and convulsed as he was met with excruciating pain, baring his teeth at Ada in a panicked state. Ada was the only doctor on duty at the time, so she blew her whistle for help, but quickly discovered that the whistle served as a tranquilizer for Emil. Emil settled down, and his pain disappeared, hypnotized. Fascinated by the concept of hypnotherapy to rid patients of their pain and thrilled to have found somebody that was susceptible to hypnosis, she devoted herself to Emil's cause.

Ada was consumed by the guilt that stemmed from her exacerbation of Emil's pain. She confessed that it had been her who lowered his dosage, explaining to Emil that she had wanted him to think for himself. Ada wrote him a note, asking him whether he'd prefer 'Ada or medicine?'. Emil chose 'Ada'; he could accept pain as part of his treatment plan if it meant that he'd get to be with Ada. He was fully dependent on Ada and idolized her, believing that she alone could remedy his predicament. Ada took this extraordinary display of dependency as proof of Emil's love; she had fallen in love with her patient, and Emil had fallen in love with Ada, who had given him his first taste of humanity. He wrote positively of their interactions in his diary, limited in vocabulary due to his lack of education but determined to express what was in his heart.

Approaching the end of her contract, Ada visited Emil’s ‘cage’ and told him that she had three days left until she would have to leave. She decided to help Emil escape to a better place, promising that they would always be together. Emil fashioned a ring out of a rusty piece of metal and gave it to her in return for the flower she'd picked outside for him, much to Ada's delight. The drive to their new ‘home’ took several hours. They bought cakes, medicine, books and food, picking flowers from the forest behind their house to put inside of a bottle for the table. Ada encouraged Emil to socialize in an attempt to improve his spoken language development.

Ada continued to provide hypnotherapy for Emil. The sessions worked wonderfully, and Ada had never had more hope that she’d be able to ‘unlock’ Emil’s past and free him from its grasp. He had grown capable of describing multiple flashbacks of his, which Ada could analyze easier as they had reached a newfound transparency. Unfortunately, their progress stagnated, and Emil's pain reappeared unexpectedly, his memory suddenly deteriorating. It was a tragic setback that Ada had not prepared for. Terrified that she would lose her one and only love, she announced to Emil that they would depart at once for 'paradise'; Ada lacked resources alone, so she made a deal with an old acquaintance to find a cure at the manor.[6] When Emil tries too hard to remember his past, his painful episodes flare up, holding onto his aching head for dear life... But he is truly satisfied beside Ada, as is evidenced by his faithfulness to Ada and her experiments.

Connection to other Characters

Concept Art of Patient in the China Servers.

Patient's first external trait, By Hook or By Crook in the China Servers.

In the "Time of Reunion" Trailer. 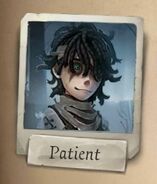 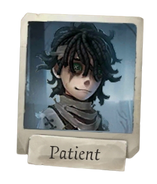 Dear Detectives, love is in the air as these two lovebirds will take you on a journey and share Ten-Days of Memories with us!

"It doesn't matter where they're going, as long as they're together. Stay with us and uncover the pages of their love story."