The smell of certain medicines and medical equipment

This unique fragrance, 'Euphoria" was inspired by a mysterious formula from the black market, but the perfume has not yet been perfected, so she came to the manor in search of the formula's source.

Vera Nair (formerly Chloe Nair), also known as the Perfumer, is a survivor available for purchase after completion of the prologue. She is one of the 30 playable Survivors added to Identity V.

Vera/Chloe has a petite build with a peach skin tone.  She has black eyes. She has long, brown hair tied into a large half-bun. She dons a slightly torn violet and indigo dress that has a small golden chain with two small bottles attached to it. Her dress is splattered with multiple substances. She wears a pair of black gloves and stockings along with a pair of navy blue shoes. Her most prominent feature is her veil, a black veil that covers half of her face and is adorned with multiple small flowers. She has a mole located under her left eye. Her perfume bottle appears to be a vintage atomizer with a silver bottle and a dark purple bulb.

A famous perfumer from Grasse. After years of searching, she received inspiration from a mysterious perfume recipe and created 'Euphoria', a perfume that helps you to forget about your worries. Unfortunately, the aroma doesn't last long enough. She has no other choice but to go to the source of the formula and find a way to improve it. Hopefully, the owner of the manor can help her to relieve all of her worries.[2]

The perfumer can spray her Perfume, 'Euphoria', 3 times. Her perfume acts as a timestamp, as she will be able to teleport to the location she sprayed her perfume and will be in the state she was in when she sprayed it. If she fails a calibration while decoding, the current decoding progress will be decreased significantly. She takes longer to heal than other survivors.

All completed Objectives reward the player with +335 Logic points for the Logic Path. After her deductions are completed, her Worn Clothes will be available.

A famous perfumer from Grasse. After years of searching she received inspiration from a mysterious perfume recipe and created 'Euphoria', a perfume that helps you to forget about your worries. Unfortunately the aroma doesn't last long enough. She has no other choice but to go to the source of the formula and find a way to improve it. Hopefully the owner of the manor can help her to relieve all of her worries.

Chloe was born as one of the twins to her family, her sister, Vera was more loved as she was less weird. Vera was the only one who understood her and cared for her, and Chloe loved her deeply. People always thought that Vera was proper, while her twin was weird, tinkering with perfumes and smells. Vera once wrote in her diary, "Chloe has talent which only people can dream of, I wish people would recognize it." Vera then opened her own perfume shop, using Chloe's perfumes, as she was popular, the shop became a big success. She only wanted people to know Chloe's talent, but Chloe misunderstood and thought her sister was stealing her talent, and she killed Vera, then, she took her identity, no one ever questioned the disappearance of Chloe, and were glad that she was gone. Vera (Chloe) then found her sister's diary, after reading it, she suddenly realized that she had killed the only one who loved her, and cared for her, she wanted to forget the incident, and thus created 'Euphoria'.

The Vera that we know in-game is not actually Vera; she is her twin sister named Chloe Nair. Chloe and Vera were born in the French commune of Grasse, and according to deductions shared a connection that others couldn't understand (presumably due to being identical twins). Vera was revered by the community; Chloe, on the other hand, was seen as strange for her talents in perfumery. The people of Grasse regarded Chloe as odd not only for her talents but for her personality. Her father told her that if she ever wanted her work to be appreciated, she must cease her strange ways.

Vera, unable to understand why people were treating her sister so poorly, stood unwaveringly by Chloe's side. Vera's kind treatment and her willingness to listen, understand, take her seriously, and support her in everything she did was something Chloe was very grateful for. She felt that there truly was nobody who would know her better than her sister. One day, Vera opened a perfumery in her own name utilizing the recipes that her sister created. The shop was a huge success in the industry, attracting widespread attention; resenting what she took to be a betrayal, Chloe killed Vera, then took her identity and continued to run the shop. Chloe felt that she was claiming the fame and fortune of the shop that should have been hers, and assumed that nobody would care about or notice the disappearance of Chloe (she turned out to be right about this).

Chloe was ecstatic with all of the attention until she discovered Vera's diary where her true intentions were written; she had opened the shop to help her sister's work get out into the world with a positive reputation before she would hand the business over to Chloe. Vera wrote that she knew Chloe might not want her help in this way, but she was willing to take the risk regardless. Realizing that she had killed the only person she had ever trusted, Chloe fell into a depressive state and dedicated her life to perfecting Euphoria, a perfume with memory altering qualities, trying to forget everything that happened. Despite this, Chloe knows she has become so comfortable in Vera's identity that she can never return to the person she used to be.

Non-exclusive accessories that can be worn by any survivor can be found here.

Pets for survivors are non-exclusive and can be worn by any character. A full list of Pets can be found here.

This section only lists emotes exclusive to this character. The list of Emotes that almost every survivor can use can be found here.

Vera Nair when using her perfume 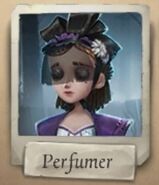 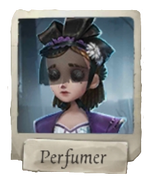 Add a photo to this gallery

A chibi perfumer featured in the Autumn Appetite official art posted on the Identity V Twitter. She seems to be admiring the paper butterfly decorations.

"Dear Detectives, join us in saying a prayer of well wishes for the Priestess today; it's her birthday! Happy Birthday, Fiona Gilman!"

"2020 is here! Wishing all of you a happy year filled with golden light~ And do please continue to enjoy Identity V 「Come and play with us this New Year's Eve!」"[3]
Add a photo to this gallery

Birthday Information
Add a photo to this gallery

Retrieved from "https://id5.fandom.com/wiki/Perfumer?oldid=29574"
Community content is available under CC-BY-SA unless otherwise noted.